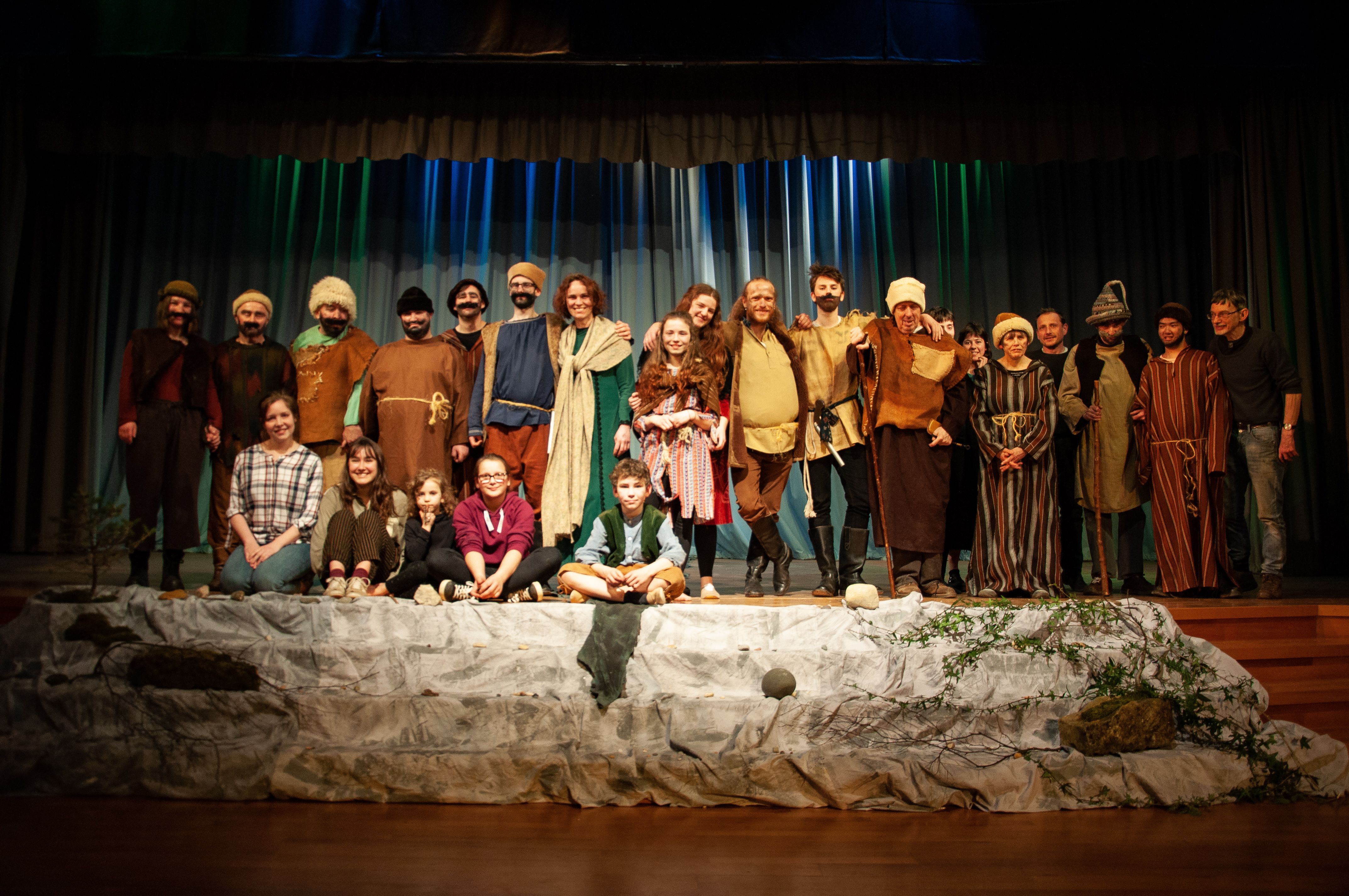 On Saturday 16th March, Ronia the Robber’s Daughter, an EVCC production in collaboration with CVT Botton, premiered in the Joan of Arc Hall in Botton Village. The performance was the culmination of several months of hard work by a large cast of both adults and children.

I did not know the story of Ronia the Robber’s Daughter prior to watching the play, much to the amazement of many a German co-worker. The play, adapted from the book by Astrid Lindgren, tells the story of two rival robber families. They live in a castle, divided by a chasm that appears one night during a lightning storm. During the fateful night of the storm, babies are born to each family; a boy named Birk and a girl named Ronia.

Destined to be enemies, the pair meet by chance in the surrounding forest and are bound together when each saves the life of the other. As the rival robber gangs discover their friendship, the heads of the families vow to go to war against each other and Birk is eventually captured by Ronia’s gang. Ronia makes the ultimate sacrifice by giving herself up to Birk’s gang, causing a stalemate between the sides. As in every good community, it is the women who take control of the situation, shame-facing the belligerent men by pointing out that the children are the wisest among them.

As the curtains opened, the multi-talented Símon and Kaya Brzobohaty serenaded the audience with a piano and violin duet, setting a high bar that they managed to raise skyward during their touching performance as Birk and Ronia. Knowing that the two are real-life siblings only made the performance more engaging. When they fought each other, they really meant it; when they put their own lives on the line to help each other, even more so. Playing starring roles on a big stage would have phased many a young person, but Símon and Kaya took it all in their stride, deserving the huge round of applause they received from the audience at the curtain call.

The main players were supported by a large cast of adult residents of both CVT Botton and EVCC. Klara Brzobohata proved that talent runs in the family, playing Birk’s mother and helping to carry her robber gang through their performances. Lota Brzbohaty, the youngest Brzobohaty sibling, did some sterling work with moving props during scene changes, as well as playing an eerie harpy in the forest scene.

‘I liked it. I liked the sound of the thunder and lightning made by the actors stomping on the ground. They romped on the stage to make the thunder and the lights made the lightning. Like a real thunder storm. The cauldrons were good. They reminded me of Macbeth.’ Gabrielle Werth.

James Lewis was given the task of narrating the story, doing this without hesitation, repetition or deviation, but with a little bit of moral support from guest volunteer, Anna.

The robber gang members also included James Skinner, Isaac Shaw, Frank Walters, Etienne Shroeder, Martin France, guest volunteer Johnny, and real-life thespian couple Michael Mitchell and Julie Schofield. There was banter aplenty as the men took turns to tell jokes and fight each other, but a personal highlight was when they each gave their own present to the new-born babies, in particular when Michael stated that he would give baby Ronia some rope (with an aside of ‘because Etienne told me to’ ) and when the audience waited with baited breath as Martin France took a dramatic pause before bequeathing baby Birk a … broken shoelace.

Guest-volunteer performances enriched the play, with Roberto playing the part of Matt the robber chief with gusto, Alex commanding the stage as Borka, the leader of the rival gang, and Janneke’s light-hearted performance of Lovis.

As with any play, so much of the hard work goes on behind the scenes. Some of the scenery was hand-painted especially for the production, and the props cleverly created by the EVCC players, such as the ‘fires’ burning on stage. Directors Mark and Ida fulfilled the difficult task of managing the diverse cast and giving actors meaningful roles to play, as well as creating moments for the whole cast to join together in song and dance.

This is the first full-scale EVCC production since the (re)birth of the EVCC community in February last year. As spring begins to bloom, our expectations for the community seem to be coming into flower, in so many different realms of our lives. Watching a performance like Ronia only increases the feeling of positivity for what is emerging.